- August 02, 2017
It's not every day that you wake up in the middle of a dream and find out that it's real. But that's what happened to me landing in South Africa. I could never paint a true picture that would represent the incredible experience I had on this trip. It has to be experienced. But I'm going to try to detail the trip as well as I can with the rest of this series. Enjoy and please comment any questions you have about the hunt!

As my overnight workday was ending, my real day was really just beginning. Leaving work at 5am, I hurried home, took a shower and loaded my bow case, backpack and a suitcase into the back of my sister's car. My mom, dad and sister were taking me to the airport to see me off on my first ever trip out of the country. I had gone over my list of items to bring many times, and as we neared the terminal of the airport, I mentally checked them off again, not that there was really any time to pick up anything last-minute anyway. Ok, I think I have it all. Keys. Where are the keys to my bow case? I put four locks on it this morning and I have no idea where the keys are. Nope, not in my pockets. Not in my pack.

"Siri, where is the closest Walmart?" Fortunately there were two within about 10 minutes of the airport. We were tight on time but I had no choice but to get a pair of bolt cutters and new locks. We made to back to the airport in time and security went pretty fast. I never know when flying with a bow if the agent at the counter is going to treat it as a gun or not, so I usually try to allow a little extra time. Next stop, Atlanta. 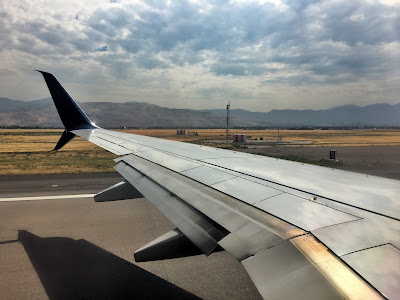 The flight went by pretty fast, and before I knew it I was sitting for the first time in the F Terminal of the Atlanta airport where most international flights arrive and depart from. It was still Atlanta though, and I've been at this airport many times during the 7 years I lived in Georgia. The three hour layover was enough time to get to where I needed to be and grab a bite to eat before boarding the plane for the 15 hour leg of the trip.

The plane was late leaving due to an incident with another passenger, which I am told made the news before we got off the ground. But anyway, we are Africa bound. I'll admit that I was not looking forward to this part of the trip, but the advantage of working all night before and being awake over 26 hours by the time the plane was in the air, meant I slept pretty well on the plane. Honestly the flight wasn't any worse than a long road trip in the back seat of a car. For someone taller that may sound like misery but to someone of my stature, it isn't unbearable. Plus there was a screen in the headrest in front of me that offered and a few decent movie and music options, including albums by Merle Haggard and Albert Collins. 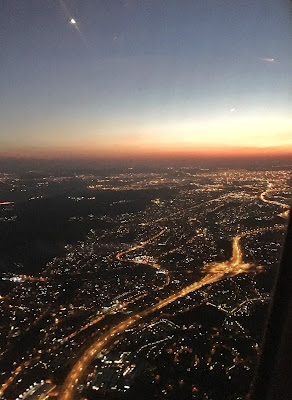 Flying over the deserts of Africa right at sunset provided some amazing views. Always a sucker for a good sunset, I didn't capture many photos of it because I was literally in awe. By the time I came to myself, most of the colors had faded. Landing in Johannesburg was also my first time going through customs, and though the experience itself wasn't that bad, the line was. Then just like America, the airport employees had treated my bow (along with quite a few others) as a gun, and sent it to security where hunters traveling with guns had to verify their paperwork. I found this out about the time I met my PH Brent, who had been patiently waiting for me to make it through customs and baggage claim. I was following the one airport concierge who was interested enough in my situation to take me where I needed to go, rather than point to the "oversized baggage" signs and go back to what they were doing as three others had done. Waiting in line for my bow, I recognized a few faces I had seen boarding in Atlanta, and soon found out we were headed to the same lodge. Joining Brent and I in his truck were Erisha his skinner, and Art Collier from the other party in camp. So a few hours late due to the delayed departure, misplaced bows and long lines, we were all on our way to Wild Wildebeest Lodge.
africa african hunting African Safari archery archery hunting delta airlines hoyt bows numzaan wild wildebeest safaris