Wyoming has once again taken over management of wolves within its borders. The Circuit Court of Appeals in Washington, D.C., entered its final order in favor of Wyoming in a lawsuit that put wolves back on the endangered species list in 2014. The court announced in March that it had upheld the state’s plan but had not issued its final order. Tuesday’s decision is what Wyoming wolf managers hope is the last legal battle in a roller-coaster legal process. 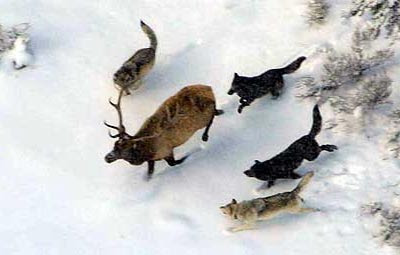 One interesting note is that no changes were made to Wyoming’s wolf management plan from when the state oversaw the carnivores between 2012 and 2014. Wyoming will manage the 100 wolves and 10 breeding pairs outside of Yellowstone National Park and the Wind River Indian Reservation. Wolves in the majority of the state will be considered predators and can be shot on sight, similar to coyotes. In the Northwest corner of the state where most of the wolves are located they are classified as a trophy animal and will be subject to fall hunting seasons. Season dates will be set by The Wyoming Game and Fish Commission after a public comment period.

Environmental groups sued Wyoming in 2012 over the state’s management plan claiming that the state’s plan to maintain a buffer of more wolves than the required amount was not legally binding and insufficient to protect wolves under the Endangered Species Act. Since that time, surrounding states have effectively managed their wolf populations but Wyoming's hands have been tied when it comes to managing a predator that has a very real impact on the rest of the wildlife in the state.

The topic of wolf management is very polarizing, with very strong opinions on either side. Some would have no management of them at all, and others would like them all wiped off the face of the earth. Like most issues, I tend toward the middle ground. I believe that as a native species in the state, wolves have their place, and that with effective management, can cohabit with our elk, deer and moose. That's with a strong emphasis on the management, because left unchecked, wolves can decimate our elk herds. In many areas that I hunted growing up, elk behaviors and populations have changed drastically since wolves began moving out of the Greater Yellowstone area. This ruling is a giant step forward in the management of Wyoming wolves.
at 4:37 PM No comments:

Here's a great clip from Shane Mahoney's speech at the 2017 RMEF National Convention. If you are not familiar with his work, I highly recommend researching it. Born and raised in Newfoundland, Shane is a biologist and writer widely known internationally as a lecturer on environmental and resource conservation issues.


A committed hunter and fisherman, Shane lectures widely in the United States and Canada on the future of hunting and sport fishing and the role hunters and anglers have played in conserving our wildlife legacy. He frequently addresses resource management agencies and professionals concerning their roles as conservation leaders in the 21st century and conducts workshops on this theme throughout North America.

Also check out his recent interview with Adam Janke on the Beyond The Kill.FM podcast. It's a great listen and well worth your time.
at 10:34 AM No comments:

This film from RogueWild is their entry in the 2017 KUIU Film Festival. RogueWild is part of the HunterVids network and this film is a great representation of the quality content available at HunterVids.com. Check it out!