Lately I've been listening to a lot of hunting podcasts, especially when I'm running or at the gym. I know that most people listen to jammin' music when they're working out, and sometimes I do too. But the primary reason that I'm training is to be a better hunter, so there's no better time to listen to some of the good info coming from the podcasts available now.

There are quite a few hunting related podcasts out there now, and from time to time I check out topics from most of them. There are 5 that I am subscribed to and like the most, all for different reasons. Im not saying by any means that you shouldn't listen to any others, but these are my picks.

The Gritty Bowmen is a podcast by Brian Call and Aron Snyder and is probably the most entertaining of the bunch. These guys and their guests bounce around lighter side of hunting while still giving you an hour or more of solid information every time. From gear recommendations and shooting tips, to interviews with high profile hunting celebs, and a steady stream of Snyderisms, this podcast is a hoot.

My buddy Mark Huelsing, blogger at SoleAdventure.com, and Steve Speck of EXO Mountain Gear churn out some great info that is usually tailored to the backcountry hunter, but can truly be applied to almost any type of hunting. With a heavy emphasis on gear and preparation, this is great listening as you get ready for a hunt out west.

John Dudley has been one of my favorite writers for many years, and his podcast is also one of my favorites. John is an absolute genius when it comes to tuning and shooting bows, and he shares his ideas, tips and tricks with anyone who will listen. I have a lot of respect for someone who is willing to put information that it took him years of trial and error to acquire out there for everyone to hear. If you're an archer, you will benefit greatly by listening to him.

The Jay Scott Outdoors podcast is a wealth of knowledge for the western hunter. Jay covers draw odds and strategy, recommends areas for each species and gives hunting tips backed by many years of guiding experience. Jay is a guy in the know and you will be too if you listen to him.

Steven Rinella's TV show Meat Eater broke new ground by focusing on not just the hunt, but the culture around hunting that includes eating what we kill. His podcasts tackle a variety of issues from conservation to squirrel hunting with dogs and like the Gritty Bowmen, are both informative and entertaining.

Do you have a favorite podcast that I didn't mention? I'd love to hear about it.
at 10:36 AM No comments:

At the National Wild Turkey Federation Convention back in Februaury, I had the opportunity to meet Todd Roark, the CEO of HunterVids.com. We struck up a conversation based on the fact that I was wearing a KUIU shirt, and KUIU is the official sponsor of Todd's site. That conversation led to an opportunity for me to work with HunterVids writing some web content, but this post is more about the website itself than that.

HunterVids is an online destination for  a huge collection of high quality hunting films. Some of these films are available elsewhere on the internet, but many are created specifically for the HunterVids network, and all of the films showcased are top-notch. They're all sorted by categories, so depending on what type of film you're looking for, you can find a bunch of them based on the species or geographic region you are interested in.

In addition to the collection of films available on the site, HunterVids has also created the very first online hunting film festival called the Advent. These exclusive films are available On Demand through HunterVids.com for $10. The films vary widely in content and scope, and feature hunts for several different species over several continents. It is truly worth your time and money to watch these films if you enjoy and appreciate quality hunting productions by talented people.

To sweeten the deal, HunterVids is giving away some awesome prize packages, and you're eligible to win them just for signing up to watch the films. For example, here is the list of items that will be given away this November:

As you can see, that's an impressive gear list and you get an opportunity to win by signing up to rent the Advent and watching it. It's pretty hard to pass that up.

Again, this is all available at HunterVids.com.
at 10:29 AM No comments: 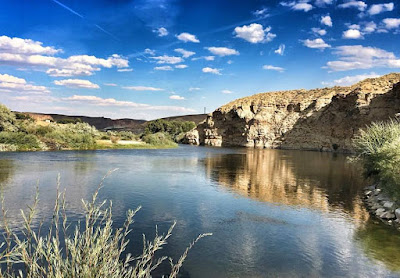 I recently had the opportunity at work to move back to my hometown of Green River, WY and recieve a promotion in the process. While I've given thought to moving back home over the years, I never dreamed it would all work out the way it did. I am really blessed to be back close to my family, as well as back in the West which feels like home to me.

Since I didn't draw any tags this year, I'm looking forward to having the ability to hunt Wyoming as a resident next year. In the meantime, I have a nonresident fishing license that I've got to get my money's worth out of!

I'll be posting more regularly from now on so be sure to subscribe for notifications of new posts.
at 10:11 AM No comments:
Newer Posts Older Posts Home
Subscribe to: Posts (Atom)