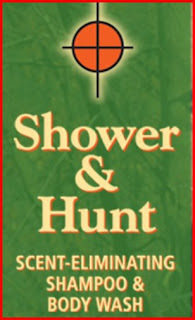 After two years of development, Shower & Hunt represents the best shower and hunting experience on the market. Here are several key benefits of the Shower & Hunt formula:

- Eliminates the human scent to help you be undetectable by game
- Professional, salon-quality ingredients
- Perfect for everyday use from head to toe
- Non-toxic ingredients for use in the field as a hand or facial soap, or on cuts or scrapes
- Versatile formula can be used as a field spray when diluted
- Convenient size is perfect for travel
- Made in the USA

Shower & Hunt is a revolutionary product that can increase your success in the field. Use this shampoo and body wash to take your mind back into the field everyday. Shower & Hunt is perfect for your non-hunting days because no-odor is a good odor.

For more information check out www.showerandhunt.com.

But it's been a busy start to the new year, so cut me a little slack. I've actually had this post saved for quite a while and forgot to post it. Remembering to post should be on my resolution list.

This is the time of year when retailers can make a fortune by selling diet plans, diet food, exercise equipment, running shoes, athletic clothes and gym memberships. Everyone has “resolved” to be healthier, drop a few bad habits and other healthy choices. These are all great things, and I applaud those who make these changes and stick to them. Unfortunately, much of the time, myself included some of those resolutions never make it past the end of January.

A lot of bloggers post a list of their New Year’s resolutions, and I did the same last year. In a way, you’re really putting yourself out there and creating some accountability to yourself and your readers. I will admit that I’ve fallen short on a few of mine. I had some major life changes this past year that caused me to lose focus at times. I’ve now renewed my commitment to them and I have just one new resolution for this year: Everything I do, I will do better. That may seem pretty general, but the truth is I don’t want to settle for where I’m at in any aspect of my life. I could use some improvement in a lot of areas, major and minor. I’ll keep pushing and making new goals, or resolutions, throughout the year.

I’m sure I’ll fail at some things. Obviously my goal isn’t to fail, but failure comes from trying. The only way
not to fail is not to try. That’s called giving up. And there’s a big difference between failing and giving up. 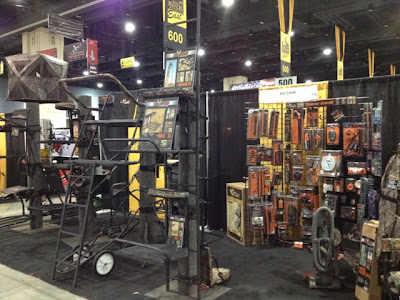 I just got back from Raleigh, NC where I worked a booth on behalf of one of my sponsors, Big Game Treestands. Big Rock Sports is a major sporting goods distributor and these shows are put together for manufacturers to display their new gear and for dealers to place orders for the upcoming year. This was my first experience working on the dealer/distributor side of the business so needless to say I learned a lot. I got to meet Zach Barrett who is head of pro staff as well as sales and marketing for Big Game Treestands and several Hudalla reps who do a great job marketing our products.

Big Game has some really nice new stands coming out this year in an all-new Platinum Collection. These stands have higher end features and are well-designed for comfort and safety. There's also a new safety harness and trail cam coming out, plus a whole slew of new accessories. 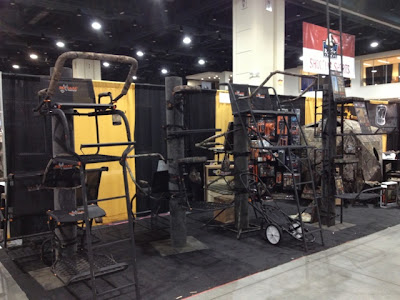 Another thing that I found very interesting was the effect that the recent gun control issues and spiking gun sales has had on dealers. Most of them were spending the bulk of their time on ordering guns and ammunition from those vendors, then using what was left to buy the remaining hunting and fishing gear. Gun manufacturer reps such as Remington and Federal Ammunition were reporting astronomical sales numbers that will take them most of the year to fill.

It's hard to blame the dealers...that's where the money is right now. I expect this trend to continue until the gun control debate is temporarily resolved or at least subsides. I say temporarily because new laws that are put into place never have the effect that their liberal writers have in mind and only serve to restrict the freedoms of law abiding citizens. Soon enough, these gun control proponents will demand new legislation. But enough of that soapbox for now.

I had a great experience at the show and I'm looking forward to working more with the guys at Big Game this year. Most of he guys are now at the ATA show in Louisville, KY this week. I've seen some pics of the booth there and it looks awesome. Hopefully next year I will be in attendance.
at 1:17 PM No comments:
Newer Posts Older Posts Home
Subscribe to: Posts (Atom)