Into Africa: Rifle or bow?

If you've been keeping up with me for a while, you may know that I'm going to hunt Africa in 2017. Even though I've been talking and thinking about it often, I don't think the reality of that sunk in until I met Mike and Karen Helbing at the NWTF Convention in Nashville. They weren't at the World Deer Expo last year where I won the safari they donated, and prior to meeting in Nashville we had only corresponded by email. When I sat down at their booth at NWTF and Karen started going over all the logistical details, it finally hit me....I'm going to Africa!

Wild Wildebeest Safaris is based in South Africa, with hunting concessions throughout South Africa and neighboring countries. They offer hunts for almost every huntable African species, limited only by your pocketbook. Looking at pictures and video of the accommodations, the lodge appears to maintain a good balance between the African experience and still being comfortable enough for Westerners to relax and rest easy during their stay.

Between research on my own and conversations with Mike and Karen, I know a lot more about what to expect than I did back in July when I won the safari. The main question in my mind was whether I would plan to hunt with a bow or rifle. Bowhunting is by far my favorite method, but I'm not going to hunt Africa every year, and I don't want to come home from this kind of trip with nothing to show but some landscape photos. After asking questions about the opportunities for bowhunting and looking at the extensive catalog of succession bowhunts they've had the last few years, I've decided to hunt with a bow. As a last resort, rifles are available to rent if the stick and string work doesn't go as planned.

Bowhunting Africa is more seasonally dependent than rifle hunting, due to the fact that much of the hunting involves sitting in blinds over water holes, and for that tactic to work you need dry weather. The season begins in May and gets drier as it goes on to September. So my tentative plan is to hunt in late July/early August.

The next update on this hunt will be my "wish list" of animals, which may or may not change over the next year and a half. There's plenty of time to add and remove animals from the list, but I want to have a general idea. More on that soon!
at 10:59 PM 2 comments:

On February 16, the Georgia House Public Safety and Homeland Security Committee passed House Bill 859 on a 10-3 vote.  HB 859, sponsored by Representative Rick Jasperse, a Republican, seeks to amend restrictions in state law that prohibit law-abiding Georgia Weapons License holders from being able to carry and protect themselves on college and university campuses. Today, the Georgia House of Representatives passed the bill on a 113-59 vote.

Although it's already obvious to many of us, CCW holders do not threaten public safety, as they are one of the most law-abiding portions of the population. They shouldn't be prevented from exercising their right to self-defense simply because they are seeking a college education. The bill will now move to the Senate for committee assignment and consideration.

In other college news, many colleges take great pride in bragging about their “diversity” and “inclusiveness,” but just wearing a tool of his trade was reason enough for one police officer to be excluded from a class he was taking at Darton State College in Albany, GA.

There aren't many details available, but several accounts say the uniformed officer escorted from class because the instructor was uncomfortable that a gun was in the classroom.

So far there is nothing to indicate that the instructor’s “discomfort” was due to any threatening or disruptive behavior by the officer. The school has reportedly apologized to the officer for the incident. It turns out that Darton State College generally bans firearms from campus, but makes an exception for police officers.

Most colleges and universities ban staff and students from carrying weapons on their campuses. These bans do nothing to prevent firearms-related incidents! All they accomplish is providing an easy, open opportunity for those who would do harms to others and don't pay attention to the "gun free zone" signs.

This has led to efforts to recognize right to carry on campus in several states. Let's hope HB 859 continues to carry through the Georgia senate. 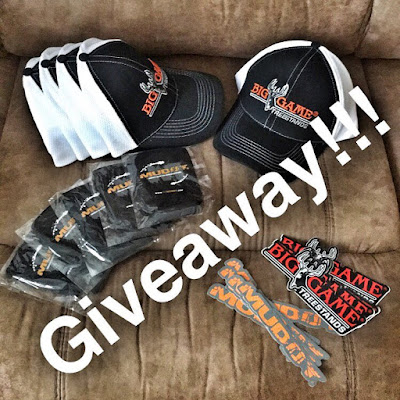 I'm doing a giveaway over on my Instagram and Facebook pages. Here's a chance to win some cool Muddy and Big Game Treestands gear. Find me on Instagram @_Up_and_Adam and on Facebook at facebook.com/upandadamadventures. 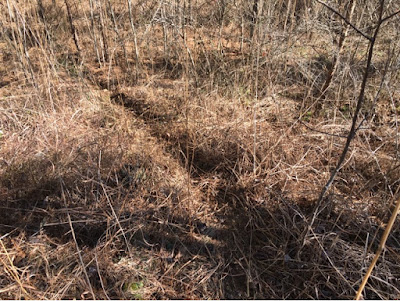 This time of the year is the perfect time to scout your whitetail property for sign from the rut and late season travel patterns. The advantage to scouting now is that the rubs, scrapes and trails from the past few months will still be fresh enough to read as a general rule, and you can piece together what the deer were doing toward the end of the season on your particular property. This can help you determine if you need to move your stand locations from the previous season.

On the hunting club I'm a member of, scouting after the season closed led us to discovering an area full of sign that we just weren't aware of. We got the property in the spring, and although we did some quick scouting and food plot work, there was no way to know exactly where the deer would be when hunting season got here. Now that we've got one season and a general idea of deer patterns on the property under our belt, adding some post-season scouting should help us be more successful this coming fall.

Another benefit to scouting this time of year is that you aren't spooking deer right before the season starts, or worse yet, during it. Your presence will no doubt be detected, and you may move some deer out temporarily. But once you have the information you need and don't have to venture back into those areas, the deer will settle down and return to their usual patterns.

There are a couple of bonuses to scouting now as well. For one, if you'll be turkey hunting the same general area, you can get an idea of where turkeys might be hanging out for the upcoming season. And this is shed season, so be on the lookout for antlers to collect from deer you've seen on your property and random bucks passing through.
at 7:21 PM No comments: 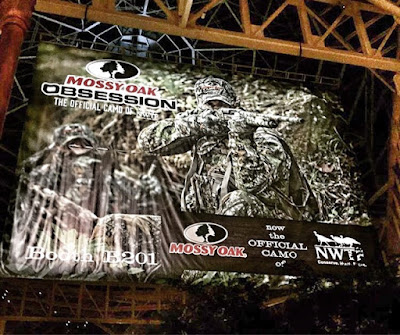 I spent a day this past week at the National Wild Turkey Federation Convention in Nashville, TN. This event is a large gathering of turkey hunting and hunting related manufacturers, outfitters, production companies and pretty much anything related to the hunting industry. One day really isn't enough to cover every square inch of the show, but I did manage to cover most of the floor. 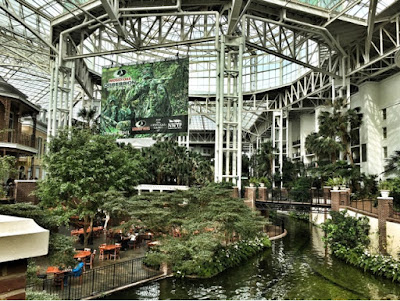 The show is held at the Gaylord Opryland complex every year, and it's a great host facility for this type of event, with plenty of space for the show floor, restaurants available onsite and of course the Opryland hotel itself. One of the main reasons I attended this year year was for a meet-and-great with Wild Wildebeest Safaris, the donors of the Safari I won at the Birmingham Deer Expo. I got to chat with Mike and Karen Helbing about my hunt, ask some questions and looks through photo albums of previous years' hunts. 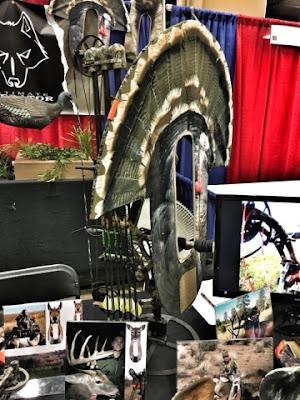 One of the products I'm most excited about are the decoys from Ultimate Predator. These lightweight decoys mount to the front of your bow and allow you to sneak in close. They have elk, whitetail, mule deer, turkey, pronghorn and even a cow. There display included a video of Super Slammer Jack Frost using the mule deer to sneak to 20 yards of several blacktail deer in Alaska. To me it seems like a great product and owner Lance Hallum seemed liked a great guy. I would really like to try the turkey decoy this spring. 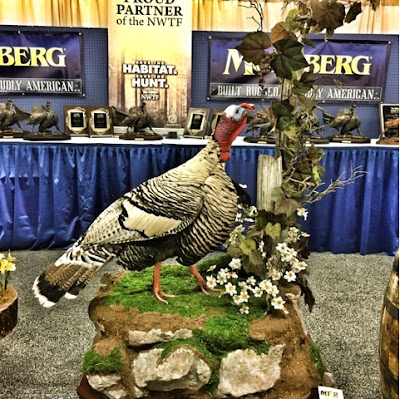 The show included taxidermy contests for turkey and for deer, with some serious prizes and bragginf rights given away. This silver bird was the most beautiful animal on display. A great job on the taxidermy, and an awesome, rare trophy for the hunter. 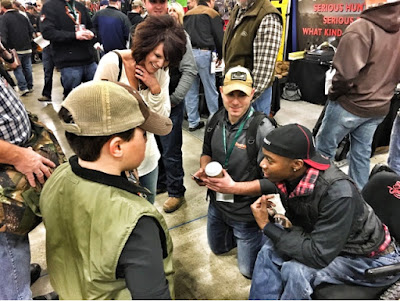 My buddy Josh Carney was at the show and his magnetizing personality seems to draw a crowd no matter where he goes. This guy can produce almost any animal vocalization with his voice, and very convincingly. He's also a huge inspiration and perfect example of turning a negative circumstance into a positive opportunity. Check out Son of the South TV on YouTube. 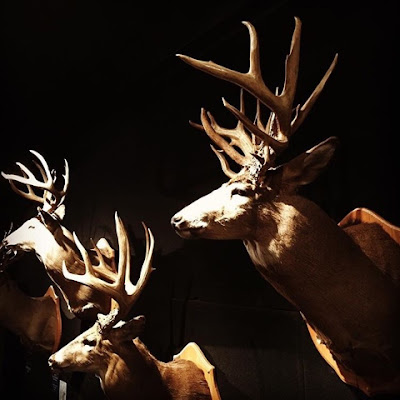 The Bass Pro Shops King of Bucks trailer was on hand, showcasing some of the largest bucks ever taken. These animals are truly magnificent and if you get a chance to see this display when it comes to your local Bass Pro Shops, I highly recommend it. 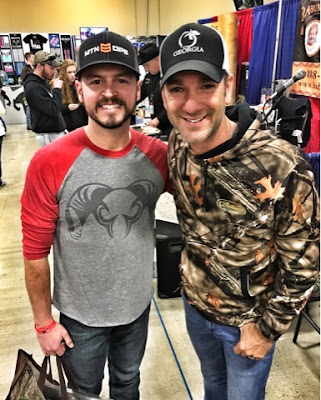 Country singer Craig Campbell among others put on acoustic shows at a few different booths around the show. His new song "Outskirts of Heaven" is a good one. Listen for it on the radio soon.

This was just a small sample of what the show had to offer. There were plenty of hunting celebrities onhand, lots of deals on new products, giveaways, seminars, and much more. I was so busy trying to cover ground that I didn't get to take a lot of photos, much less attend the seminars and auctions. Hopefully I'll have more time to take it all in next year. This show is well-worth attending if you're able.
at 7:37 PM No comments:
Newer Posts Older Posts Home
Subscribe to: Posts (Atom)