Of the three shots I had taken on animals in Africa so far, all the arrows had hit exactly where they needed to. I'd studied Brent's shot placement book over and over, and with a little bit of his coaching during the moment of the shot, had made three perfect shots. Granted they were all 16 yards or less, but the blood trails had been short and the tracking easy. I won't say I was getting overconfident or cocky, but sometimes I need a reminder not to. 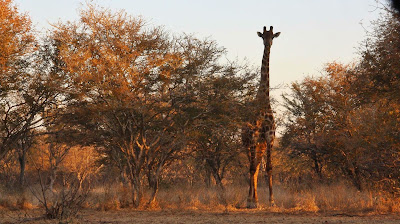 On day 5 we returned to the blind I had killed my zebra from, again planning to sit all day. An nyala was the first animal to come in after things had settled down, and soon some small warthogs appeared. Close to 10am, Brent heard the guttural grunt of an impala and signaled me to get ready. Two male impala began making their way in to the water and we agreed on which one I should take. I positioned myself to get ready to draw and Brent got the camera running. Now it was just a matter of waiting for a shot opportunity.

I knew something was off as the shot broke, and watched helplessly, almost in slow motion, as the green Nockturnal entered the impala at the right height, but about 6 inches back from where it needed to be. "I hit him too far back," I told Brent as the impala went out of sight. We replayed the video of the shot, and sure enough the arrow hit him well clear of the heart and lungs, but could have possibly hit his liver. With a questionable hit, Brent said we would give him an hour before tracking. So after forever (an hour) we called up Erisha on the radio and began to trail the wounded impala.

Wounding an animal with a less-than-perfect shot is one of the inevitables of bowhunting, and no conscientious archer takes the responsibility of making an ethical shot lightly. There was a sick feeling in my stomach as we began to follow his trail. There was blood here and there, but the impala only seemed to be bleeding when he would stop momentarily. There were no drops of blood between the large puddles that we found. M'ya was going full throttle, trying to find scent, but I think there were just too many animal trails coming to and from the water for her to get a good smell. I never saw a dog that wanted it more though.

Brent, Erisha and I were taking separate paths, fanning out to cover more ground, and Mia was out in front doing her own grid search. When she started barking, we knew she was on the impala, and Brent took off running after her with his .416 Rigby. Erisha and I followed and Mia has bayed the impala against some trees and was staying just out of reach of the now-irritated ram. He wasn't backing down so I drew my bow with Mia and Brent working the impala and hoping I would get a good second shot. After holding for a couple of minutes the impala turned broadside and I released, striking him in exactly the same spot the first shot had. I nocked another arrow and drew again, then had to let down after a couple minutes of no shot. As the ram turned once again I drew and shot him in the heart and he was down in seconds. 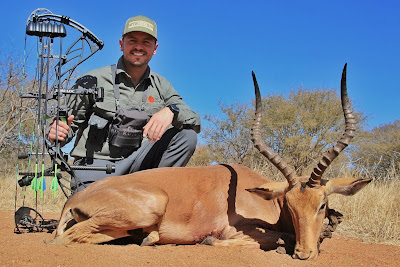 Sitting on the ground beside the impala after he expired, I thanked God that we had recovered the animal, and again for the privilege of being on African soil. Losing an animal is a risk bowhunters knowingly take every time we go afield, but that guy-wrenching feeling when you make a marginal shot doesn't go away. This whole episode humbled me a little bit, before I really knew I needed it. 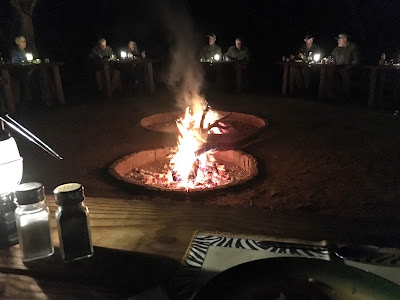 After taking care of the impala, Brent and I got back into the blind to spend the rest of the day. There was no action until right at dark. Two kudu bulls came in, then a herd of wildebeest, then a herd of eland as big as horses came in, approaching from the rear of the blind and coming within feet of us. We waited in the blind for Erisha to drive up, choosing to spook the animals off with a vehicle rather than humans coming out of the blind. That night we had "bush dinner" served around a campfire out in the bush, consisting of blesbok, hominy and roasted potatoes. We capped off the night back at the lodge around the fire, swapping stories, panning the next days hunts and listening to the PH's tell about hunting hippo and rhino.
africa archery bowhunting easton axis hoyt defiant nockturnal numzaan safaris wild wildebeest lodge zebra