We arrived at the pop-up blind with our lunch of leftover pizza packed and plans to sit all day, or until we killed something. We had the usual quick breakfast in camp and Erisha took the truck back after dropping us off. We sat for a little while and both started reading after a while. A few blesbok came into the water, but way out of range. This was a big water hole, and the majority of it was out of bow range, but many animals had been approaching where we were set up, so we were still hopeful. Back to reading The Green Hills of Africa. 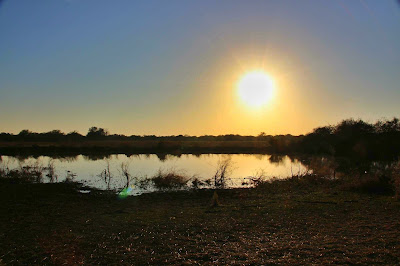 I looked up to see a kudu bull with his head down drinking water about 40 yards away but at a bad angle. I don't know much about kudu, but he looked like a pretty good one to me. There was another, smaller bull with him that was very cautious and never came out into the open. Up until then, I was still undecided if I wanted to take a kudu but seeing him in the flesh, his gray, deer-like hair, mane on his neck, the white chevron on his face and dark spiraling horns, I couldn't help but admire what a beautiful animal he was. My mindset totally changed and I decided then that if he gave me a shot, I would take it. Then, as quickly and stealthily as he came in, he was gone. Watching through the blind by pulling back the windows, we realized both bulls had stopped in the trees about 40 yards to our left and behind us, then vanished. Back to reading.

Not long after that we saw movement and both bulls walked quickly across in front of us and then began to circle the blind, presumably to try to catch our wind. They had been suspicious of this new pile of brush and kept looking our direction, and now they were trying to get a whiff of it. Thinking the kudu would wind us and be gone, I went back to reading. At some during all of this, Brent said he wished an Nyala or some other animal would come in to put the kudu at ease.

Just a few moments later, as if by design, a lone nyala bull walked in and began feeding right in front of us, also staring at the blind but not showing any signs of being spooked. The kudu remained in the edge of the bush but we could tell they were surveying for danger. Eventually, and very slowly, the larger bull began making his way toward the feed. He initially came in facing me, but after jockeying for position with the nyala, he turned broadside at 11 yards. Drawing my bow and and coming to anchor, I found my pin and brought it up his front leg and then straight up to the top of the lower third of his body. The arrow blew through him and everything ran off. The kudu bull ran to the edge where he had been standing earlier and turned around to see what happened. He stood there for a moment and then went down, in sight of the blind. 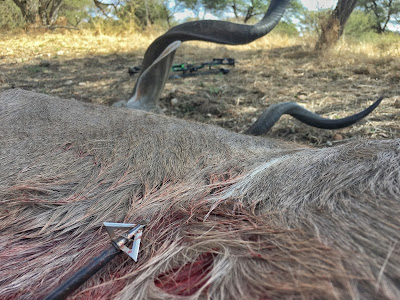 As we walked up to my bull, I realized that pictures don't do the beauty of the kudu justice and I wondered why I hadn't viewed them this way before. For one thing, he was larger than I expected, and his horns were longer as well. My mental image of kudu was a smaller bodied antelope, but he was as big as an elk. No longer an afterthought, and realizing what a good trophy he was, he became my new favorite. 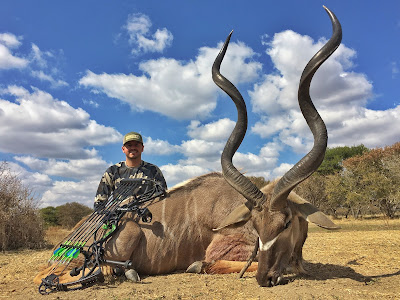 The strange thing was, I was reading the last chapters of The Green Hills of Africa when all of this action started, and Hemingway's character had just killed a good kudu bull. After some photos and taking the bull back to the lodge to be caped and skinned, we headed to another blind for the evening hunt. Warthog, sable and nyala came into shooting range, but nothing we wanted to shoot.
africa african hunting African Safari archery archery hunting hoyt kudu kuiu mtn ops muzzy broadheads numzaan safaris stokerized stabilizers wild wildebeest safaris