Brent and I had noticed that the animals weren't moving until later in the morning, so there was no need in beating the sunrise just to sit in the blind longer. We developed a routine of getting up just a little later for breakfast, after the other hunters in camp and still getting to the blinds well before the animals were moving. This time we went to yet another blind, a small tin shed built into the ground with shooting and viewing windows cut into it. We had quite a few animals come in: nyala, kudu, warthog, wildebeest and sable all wandered in and out throughout the day. Seeing so much activity kept us entertained and provided some filming opportunities but there was nothing to shoot at. Warthog was high on my list but the only males we saw were very small. Having packed a lunch, we sat all day. 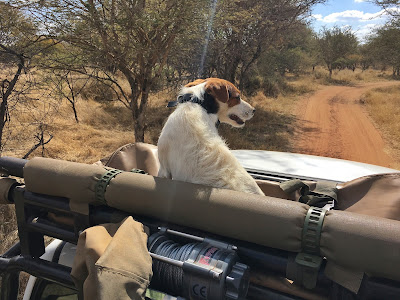 Just before dark, a herd of 8 wildebeest, a few warthogs, and a sable were all in range feeding and watering, when we saw a gemsbok carefully approaching the water. Then we realized there were two of them, and we started to get set up to take a shot if it was presented. As we were watching the gemsbok, 3 zebras came into view and Brent and I had a quick, quiet conversation that I should take the first shot presented by the zebras or gemsbok. The zebras came right in and went directly to the water hole. I didn't have a lot of time to judge them, and because they are difficult to determine I they are male or female, both are legal to shoot. I could tell one of them was darker and had bolder stripes than the others and as it happened, it turned and gave me a perfect shot opportunity at 16 yards. Aiming for the triangle on his shoulder, we watched the Nockturnal lighted nock zip right through him. He ran about 25 yards, started to stumble and went down. In all the commotion we had forgotten about M'ya, and the instant she heard the arrow fly she was out of the blind and headed toward the zebra! 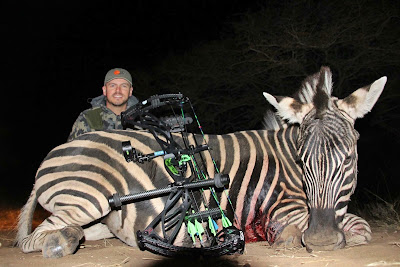 The zebra turned out to be a stallion, and his hide was even more amazing than I thought. Deep, bold stripes and a beautiful mane. Bringing him back to camp, several of the PH's remarked that zebras are one of the more difficult species to get with a bow because of their cautious nature, and also that bowhunters don't typically experience the kind of success I had so far. Hearing this from them reminded that I was blessed not only to have been successful on some great animals, but also just to be here. The hunt I won was for 5 days, but given the slim odds of bowhunting, I opted to extend my hunt for 10 days. As the fourth day wound down, I had three animals already in the salt rack and kudu filet for dinner at the lodge. I like Africa.