The next morning we would go back to the same blind we hunted the day before. The staff had prepared a quick breakfast for us as well as packed a lunch so we could stay all day. As we drove up to the blind, we spooked a beautiful sable, so we hurried and got settled in. Later in the morning the sable returned, along with two eland and the wildebeest that had been with the one I killed. These would all return throughout the day making for some excitement, but not any shot opportunities. The sable is a beautiful animal, but the trophy fee is a little more than I planned to pay. The eland on the other hand, were not initially attractive to me but after seeing them in person being impressed by the size of their body, were beginning to grow on me. 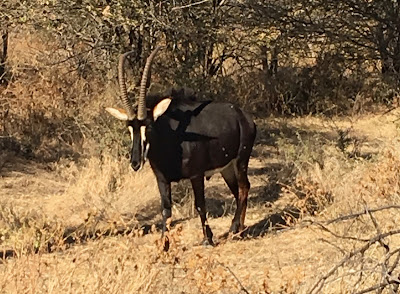 Twice we had zebras approach the waterhole, but from our blind spot and I was never able to get a shot. The eland and sable kept me entertained and provided some good video but I wasn't able to shoot anything. Blind hunting is not for everyone. It requires patience and either being ok with being bored, or bringing something along to keep your mind occupied. I brought along some books, initially to read on the plane, but they proved to be handy for all day sits in a ground blind. The Green Hills of Africa by Ernest Hemingway seemed like a great title to read on this trip. 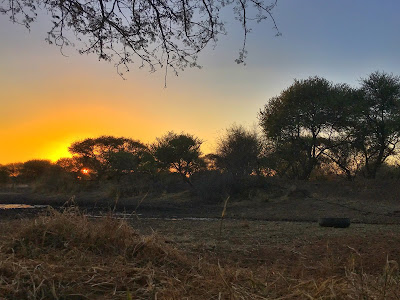 That night dinner was pizza, but we're not talking Domino's. The toppings were wildebeest, locally made sausage and other delicious stuff. Later around the campfire, Brent asked if I would be interested in shooting a kudu. One of the other PH's had spotted a good one and had a good idea where he was going for water. He had Erisha put up a pop-up blind and brush it in for us to hunt the following morning. I was of course interested to see the bull, but I hadn't planned on hunting a kudu partly because of the trophy fee associated with them. There would be other animals around, Brent assured me, and either way there would be no pressure to take him if I decided I didn't want to. Seemed like a fair proposition to me. The other great idea Brent had was to procure some of the leftover wildebeest pizza for our lunch the next day.
africa african hunting African Safari archery bowhunting. wild wildebeest lodge easton hoyt huntervids kuiu maven muzzy numzaan numzaan safaris