Having arrived at camp so late, none of us were itching to get started too early. We had to check our weapons anyway, so we got started well after daylight. I'm not sure if it was the rough handling on the planes or if I was just jumpy, but it took about 30 arrows and a sight modification to get the Hoyt grouping right. Then Brent, Erisha and I were on our way to our first hunting spot. Not far from camp, we spotted two giraffes. Giraffes! We drove up to a blind fashioned out of a burlap-like material with a window cut into it, wrapped around the legs supporting a 14x14 platform wildlife viewing station overlooking a waterhole. In addition to the water, there was a salt block and feed to draw animals in. This is wintertime in Africa, and its very dry this time of year. Brent and I got set up and Erisha drove the truck back up the road a ways so as not to interfere with any animals close by. We had been in the blind about 45 minutes when two blue wildebeest began to approach very cautiously. One of the bulls was considerably better and Brent and I agreed if he gave me a shot opportunity I should take it. After a while the two bulls settled down and came on in, and the larger one eventually gave me a slightly quartering away broadside shot. 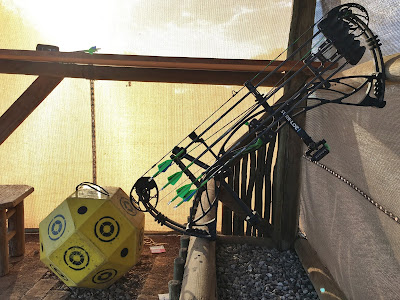 Sitting in the blind I had been studying a pocket guide to shot placement on African animals, and drawing back my bow I tried to visualize the drawing of the vitals in the book as I settled my top pin for the 14 yard shot. I don't remember the bow going off, just the wildebeest jumping and taking off in a sprint along with his buddy. This was unbelievable! My first hour in an African blind and I had arrowed one of the top critters on my list of animals I wanted to take. In a way I felt like I had avenged Mufasa by shooting one of the wildebeest that killed him in The Lion King.  Brent had been operating my video camera so we played back the shot to be sure, and it was definitely in the vitals. The hearts and lungs of African animals sit farther forward and lower in their chest cavity as a general rule and I wasn't sure if in the moment I had reverted to my hours of training to hit the vitals of deer and elk.

We gave the wildebeest about 15 minutes and waited for Erisha to get back with the truck. When we got out of the blind, Brent turned loose his wire-haired Jack Russel terrier Mia and she was off to find the wildebeest. Just as Brent told me, she had been raring to go since she heard the shot go off. We walked behind her looking for blood, and there was plenty of it. After 30 yards or so, Brent looked up and saw Mia's white hide through the bush and she was standing on top of the wildebeest, 90 yards from where I had shot him. Walking up on my first African animal was a moment I will never forget. 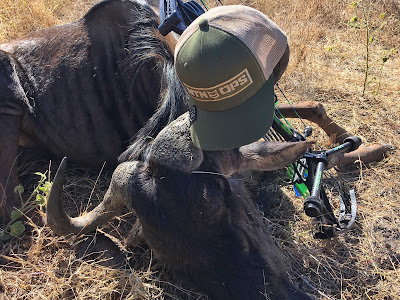 Every animal I've killed, especially with a bow, has been a trophy of the experience of the hunt on which it was taken, and the moment I first lay my hand on it holds a reverence for me unlike anything else. It's a time to be thankful; that the animal lived, that God made me a hunter, that our paths crossed here, that its meat will provide food, that I have this moment in time to remember. Sure, I take the grip-and-grin shots. When the animal is large enough, I have it mounted and I hang it on the wall. But the pictures and hair and bone that everyone else will see are more than just animal parts to me. They're a tangible memory of a time and place when I accomplished something that not everyone is able to, and a reminder of how blessed I am that I get to do that.

The score of my wildebeest wasn't important. He was an old bull, with scars on his face and worn bosses on his horns. He has lived his life avoiding wild predators and hunters like me. Now his head will come with me back to the US and his meat will be aged in a cooler and then feed other hunters who come to Africa to hunt like I have done. 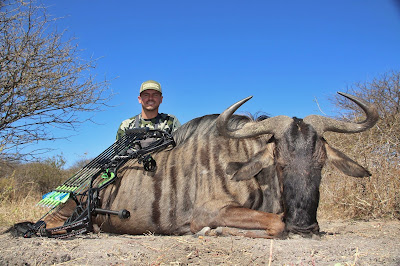 We took the bull back to the lodge and were greeted by the other guys who wanted to see him. It was the first animal taken by this group. Lourens, another PH, said in his thick South African accent "all these rifle hunters in camp and you let the guy with the bow and arrow get the first animal!" Everyone had a good laugh. Lunch (like every meal at Wild Wildebeest) was delicious, and after a short nap Brent and I headed back to the blind. That evening an eland came in, and Brent spotted some zebras approaching that never came in close enough. I got to take in an African sunset, and had a great dinner with the guys in camp, followed by good conversation around the campfire. I couldn't have asked for a better first day in the Dark Continent.
africa bowhunting. wild wildebeest lodge numzaan safaris south africa