I don't think you can get much closer to the wire than the evening of the last day of a hunt. Thursday evening as I headed toward our hunting area with my friend J.J. Salinas, his dad Joseph, and their friend John Collins, I found myself somewhere between the finality of returning to Georgia empty-handed and the hopefulness of having one more opportunity to wrap my tag around a set of velvet-covered antlers. If I didn't tag out on this trip, my tag was still good for the January archery hunt during he rut. The locals all agreed that was the best time to kill a giant muley anyway. But I wanted one in velvet. 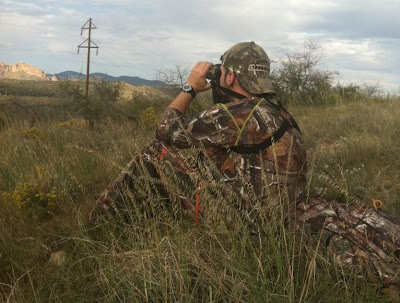 The first morning of our hunt was pretty eventful, but not as expected. We glassed up a few does, went a little farther and climbed a hill to do some more classing. Just as we were getting settled, we spotted a 4 1/2 foot rattler, then a 4 footer, all in the span of a few minutes. Both were dispatched with a few arrows. 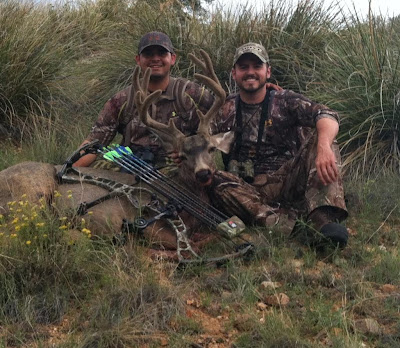 With my good friend J.J. Salinas

We took Sunday morning off and went out for a drive that evening. We saw quite a few does, a couple spikes, and 3 legal bucks, one of which was a border-line shooter. We weren't able to get on him to really check him out. On day 3 we split up in the morning and hunted different areas, then convened for the evening hunt to glass opposite sides of a canyon. The morning hunt was pretty uneventful except for pegging a jackrabbit with my bow. That evening, the Reverend was able to put a stalk on a group of bucks, and took this bruiser at about 60 yards with his Bowtech Insanity. We knew the hit was lethal, but with light fading fast we elected to wait until morning to recover him. 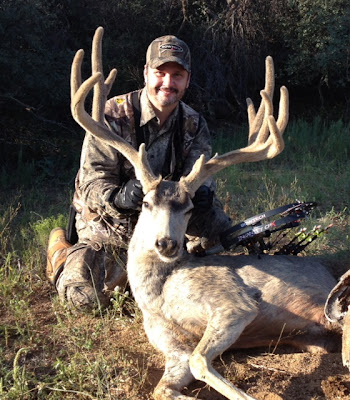 On Thursday evening, the last day of the hunt, after a last-minute change of plans, we headed to the area where we had seen the most bucks through the week. As we went along a fence line we jumped a bachelor group of 4 bucks. After they initially spooked they stopped a little ways off and turned around and looked at us. After quickly scoping them out I ranged the largest buck of the group and slowly lowered my rangefinder knowing they could bolt at any moment. Sure enough, they did and ran down into a draw and up the other side. Once there they calmly kept walking away at a quartering angle. Just before he went behind a tree I ranged the buck again and estimated the range he would be when he cleared the other side of the tree. I quickly dialed in my Spot Hogg Hogg Father sight and came to full draw. Just as he cleared the tree he stopped at a perfect quartering angle. I settled the pin on his heart and squeezed the trigger. 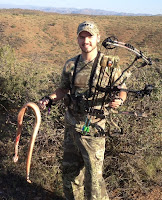 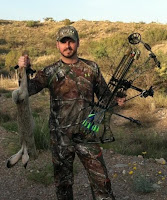 I lost track of the arrow in flight, but I heard the distinctive "whack" of a heavy arrow hitting something. I still wasn't sure, but  J.J., who was watching the deer through binoculars said "dude, you got him!" At the shot the deer turned away, causing the Rage/Easton FMJ combo to strike him in the shoulder and exit his neck. With part of a lung and his windpipe severed, he ran about 25 yards and went down. He wasn't the biggest buck we saw this week by any means, but I was very happy with him. And in my opinion any animal taken on public land with a stick and string is a trophy. 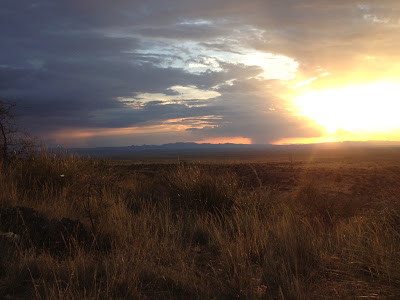