- January 21, 2012
Well that's a wrap on the 2011-2012 deer season. Finished up with a WMA hunt in Lowndes County, AL this week. It was a rifle hunt but I hunted with my bow most of the time. Our party of 5 only saw 2 deer over the course of our hunt. The rain this week threatened to shut us down but we toughed it out. We all got soaked yesterday and part of our party elected not to go this morning for the last hunt due to the weather forecast of 80% chance of thunderstorms. Fortunately for me the weather men were wrong and it turned out to be a nice morning. 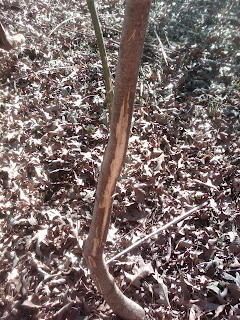 A fresh rub.
We did see lots of sign. Rubs and scrapes were everywhere in several of the areas we scouted. Most of the scrapes hadn't been hit for a while which led us to believe the peak of the rut had kicked in. We just didn't see any daytime deer movement. The areas we hung our stands in had lots of activity so apparently the deer were primarily nocturnal. 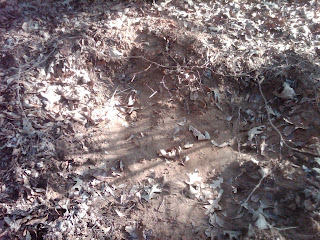 Hog Wallow.
We also saw some large areas covered with hog wallows.  Hogs have been seen as this WMA in the past but they are rapidly expanding into areas they hadn't previously been known to inhabit.  This spells bad news for game management.  On a sign at the WMA check station, the biologists advised "if you see 10 hogs, shoot 12." 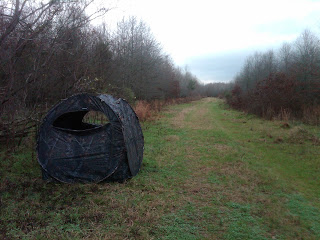 My ground blind setup from Saturday.
I got a lead on some property to hunt coyotes and turkey season starts in a couple months. Plus there's still the rest of February to hunt squirrels and 3D Archery season is kicking off. I'll be shooting the Christian Bowhunters of Georgia shoots in Covington, as well as some shoots put on by 12 Point Archery in Social Circle, GA. So even though there won't be any big game hunting going on for a while there is still plenty of stuff to shoot. 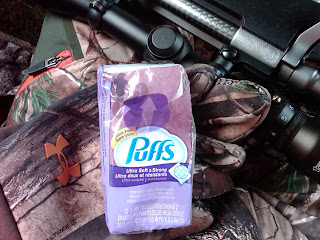 Had a runny nose most of the week
so these came in handy.

There is no off season!
Adam