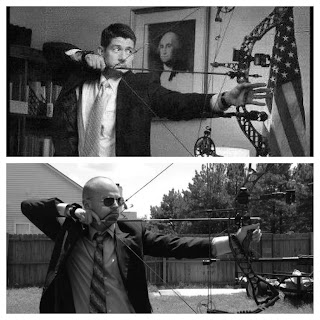 A few weeks ago I posted a picture of me shooting my bow in a suit and tie. It was right after church on a Sunday afternoon, and I got home and decided to shoot a few arrows before heading to bed to get ready to work that night. Although I had already taken my coat off, standing out there in my dress clothes with a bow in hand really tickled my funny bone for some reason. So I put my jacket back on for the photo opp.

Now that GOP Presidential candidate Mitt Romney has selected Rep. Paul Ryan as his running mate, a picture of him in a suit and tie with his Mathews at full draw has surfaced. I'm not sure when the photo was taken, but it certainly wasn't circulating like it is now. I just thought it was pretty cool that our pics were so similar. And it's certainly nice to think of having someone in the White House who understands outdoorsmen and women because he is one of us.